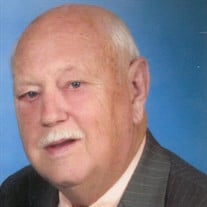 Allie “Ray” Lovette, age 81, of Taylorsville, passed away peacefully in Valley Nursing Center, Taylorsville, on Friday, April 17, 2020. He was born May 29, 1938 in Wilkes County to the late George Allen and Isabell Miller Lovette. After graduating from West Wilkes High, he entered the United States Air Force, serving from 1957-60. He was recently recognized as one of the Air Force servicemen who raised the first flag when Hawaii became a state in 1959. He was an important part of the Lovette-Holly Farms family. During his forty-seven-year career, he worked in various roles in the Holly Farms regions, retiring as Live Haul Manager. Ray was an avid horseman and was awarded the Governor’s Order of the Long Leaf Pine for his dedication to therapy on horseback for handicapped youngsters. For several years, he was Wagon Master of the Blue Ridge Wagon Train, famous for its Fourth of July trip between Wilkes County and West Jefferson. Holly Farms team sponsorship led to his love for NASCAR. He was a charter member of the Foothills Corvette Club. Together with his wife, he delivered Meals on Wheels for ten years. Ray will always be remembered for his playful sense of humor and love of music, travel, reading and Westerns. He was an active member of Mount Herman Baptist Church. In addition to his parents, he was preceded in death by one brother Ralph Harrison Lovette and a grandson, Chad Allen Lovette. Mr. Lovette is survived by his wife of 35 years, Betty Cook Lovette, as well as a son, Richard Allen “Rick” Lovette, of Wilkesboro, and a daughter, Janice Lynette Lovette, of Millers Creek. Three stepdaughters will fondly remember him: Joy Johnson Kennedy {Mike} of Lexington, Kentucky, Gina Johnson of Key Largo, Florida, and Jan Johnson of Lowell, Massachusetts. Two grandsons survive, Michael Ray Eller, Shay Martin Lovette, and one great grandchild, Ally Renee Eller. One step-granddaughter, Sophia Jane Johnson Mishol also remains. The family wishes to thank Valley Nursing Center, especially the workers on the 300 Hall, who gave Ray tender care for ten months. In lieu of flowers, donations can be made to Mount Herman Baptist Church and Caring Hearts Hospice of Newton. Memorial Services will be held at a later date.

The family of Allie "Ray" Lovette created this Life Tributes page to make it easy to share your memories.

Send flowers to the Lovette family.