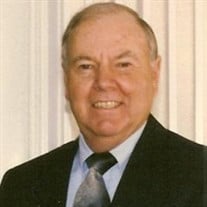 Billy Eugene Earp, age 87, passed away on Wednesday, October 7, 2020. He was born in Alexander County on October 13, 1932, to the late Clete J. and Jennie L. Earp. He served in the U.S. Army during the Korean Conflict and was honorably discharged in ¬¬¬¬¬¬1961. Billy was co-owner of Hotel Service Station for seven years, a tire salesman for five years, and retired from The Little Oil Company after 29 years, serving as manager for 17 years. Billy served on the Town of Taylorsville Planning Board for 20 years. He was a member of First Baptist Church in Taylorsville; and his love for the Lord extended to others through his service as Deacon, Church Treasurer, Boys Sunday School Teacher, Adult Sunday School Director, humbly gathering gifts for the Lord’s work. Billy’s hobbies included golf, playing cards, and watching sports. He was not a collector of material things, but a collector of love, friendships, and memories. (John 15:15) In addition to his parents he was preceded in death by two infant brothers, C. J., Jr. and James, and six sisters, Alma Milstead, Amelia Hollifield, Doris Wike Jenkins, Margie Deal, Lillian Queen, and Pauline Murdock. Survivors include his wife of 67 years, Lucille Wallace Earp; one son, Rickie E. Earp and wife, Silvia, of Southport; a daughter, Wendy E. Moretz and husband, Latt, of Bethlehem; four grandchildren, Casey Earp and wife, Bobbi, of Statesville, Courtney Scheibla and husband, Collins, of Huntersville, Brandon Moretz and wife, Ashley, of Bethlehem, and Mason Earp of Lawrenceville, Georgia; one brother, Dean Earp and wife, Mary, of Taylorsville; five great-grandchildren, Jensen and Hudson Scheibla, Brooklyn and Jaxon Moretz, and Scarlett Earp, and many beloved nieces and nephews. A Celebration of Life Service will be held on his 88th birthday and 68th wedding anniversary on Tuesday, October 13, 2020, at 3:00 p.m. at First Baptist Church in Taylorsville by Rev. Dan Redding, Jr. Inurnment will conclude in the Taylorsville City Cemetery with military rites. Services have been entrusted to Alexander Funeral and Cremation Service, where condolences may be sent to www.alexfuneralservice.com. In lieu of flowers, the family asks that memorials be given to First Baptist Church Building Fund, P. O. Box 305, Taylorsville, NC 28681.

Billy Eugene Earp, age 87, passed away on Wednesday, October 7, 2020. He was born in Alexander County on October 13, 1932, to the late Clete J. and Jennie L. Earp. He served in the U.S. Army during the Korean Conflict and was honorably discharged... View Obituary & Service Information

The family of Billy Eugene Earp created this Life Tributes page to make it easy to share your memories.

Send flowers to the Earp family.