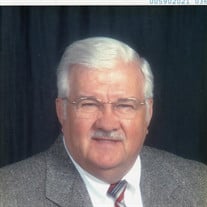 Buford Stephen Dagenhart, age 78 of Taylorsville, passed away on Wednesday, October 20, 2021, in Alexander County. Buford was born on March 30, 1943, in Iredell County, to the late Hollis Buford Dagenhart and Sarah Fulbright Dagenhart. Buford was retired from DMV as a weighman at the weigh station. He was a member of Marvin United Methodist Church. Buford served our country in the U. S. Army where he was recognized as a marksman. He also enjoyed bird hunting and fishing. Including his parents, Buford is preceded in death by his wife, Shelia and an infant son, Stephen, as well as his mother-in-law, Pearl Mayberry. Those left to cherish the memories of Buford, include two daughters, Stephanie Hubbard, and Kimberly Dagenhart (Dennis). Sisters, Penny Call and Linda Matthews (Harvey), and one brother, Howard Dagenhart (Gail). Grandson, Stephen “Brett” Dagenhart, two nieces, Sthr Dagenhart and Lisa Honeycutt and one nephew, Chris Goodman. Visitation will be held on Tuesday, October 26, 2021, at Marvin United Methodist Church from 2:00 pm to 3:00 pm. Service will follow at 3:00 pm at Marvin United Methodist Church. Lay Speaker Jeff Carson will be officiating. Burial will follow in the Marvin United Methodist Church Cemetery. Pallbearers will be, Shawn Moose, Destry Moose, Jarod Hobbs, Clint Mayberry, Jesse Harrington, and Cole Bost. Honorary, John Chambers. In lieu of flowers donations may be made to Union Cemetery Fund, in C/O Sandy Stewart, 151 Whitney Lane, Statesville, NC 28625 Funeral arrangements have been entrusted to Alexander Funeral and Cremation Service. Condolences may be sent to www.alexfuneralservice.com

The family of Buford Stephen Dagenhart created this Life Tributes page to make it easy to share your memories.

Send flowers to the Dagenhart family.