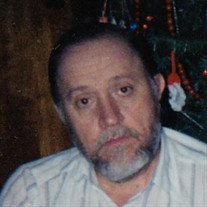 Charles Lawrence Johnson age 71 of Taylorsville, North Carolina, passed away on Monday, October 4, 2021, in Iredell County, North Carolina. Charles was born on September 10, 1950, to the late Fred Harding Johnson and Rose Evelyn Teague Johnson. Charles was a veteran of the US Army. He enjoyed work and had a love for animals especially his fur babies, Minnie Toy Cocoa Babe, Chili, and his cat Cole. He enjoyed all sports but was a fan of the Washington Football Team, but most of all he will be remembered as a sweet gentle man. Along with his parents, he is preceded in death by one brother, Dale Johnson, and sister-in-law, Wilda Sigmon. Those left to cherish the members of Mr. Johnson include his spouse of 50 years, Mary Ellen King Johnson. Brother, Steve Johnson (Angela), Brother-in-law and sister-in-laws, Cecil Sigmon, Jewell Pennell (James), Darlene Frye (Gary), John Carrigan (Frances Lucy). Two nieces and five nephews, as well as seven great nieces and 3 great-great- nieces. One uncle Hal Teague (Bonnie). Mr. Johnson will lie in state at Alexander Funeral Service Wednesday, October 6, 2021, 5:00 pm to 8:00 pm and Thursday, October 7, 9:00 am to 2:00 pm. Graveside will be held Thursday, October 7, 2021, at Taylorsville City Cemetery at 3:00 pm Pastor Andrew Miller will be officiating. In lieu of flowers, memorials may be made to Humane Society 3224 20th Ave SE, Hickory, NC 28602 Funeral arrangements have been entrusted to Alexander Funeral and Cremation Service. Condolences may be sent to www.alexfuneralservice.com

Courtesy obituary for the Johnson Family

Send flowers to the Johnson family.