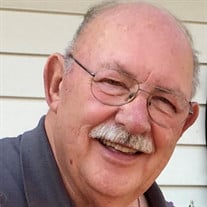 Don Franklin Simmons, age 77, of Taylorsville passed away Thursday evening April 15, 2021, at his home. Mr. Simmons was born on October 13, 1943 to the late Clifford Bliff and Emma Louise Sharpe Simmons in Alexander County. Don was a Mechanical Engineer for Comm Scope until retirement, then enjoyed traveling. In addition to his parents Don was preceded in death by his sister Alice Jane Simmons of Catawba County. Those left to cherish the memory of Don include his wife of 57 years, Carolyn Jane White Simmons of the home, daughter, Kim Simmons, and son, Andrew Simmons. Don also leaves behind his brother Johnny Simmons (Theresa) of Catawba County, nieces: Dinah Brown (Danny), Marla Winkler (Monte), Trisa Barnes (Brandon). Great-nephews: Leyton, Collin, Logan, Tristan, and Tucker. Don enjoyed a special relationship with Logan, Tristan, and Tucker. Step-nephew and nieces: Tiffany Oliver, Jeremiah Shook; Step-great nephew and nieces: Cristine, Jesse, Alex, Jackson and Fallon. Special members of our family include Jackie Stutts and Joe DeRoche. Don loved spending time with his family. Trips to the Blue Ridge Mountains and big family dinners were some of his favorite times. Don told a good joke, and he liked nothing better than making others laugh. From a very young age, Don was a huge dog lover, and in particular, he enjoyed beagles and cocker spaniels. He told lots of stories about taking his first cocker spaniel bird hunting when he was a boy, and he adored Casey Jones, the family's cocker. Don was an avid hunter and an expert marksman. He especially enjoyed yearly hunting trips in Canada and competition shooting with a group of good friends—the "Bang Gang." If you needed something repaired or built, Don was your go-to guy. He was fascinated by engineering and how machines are built and operated. He could repair just about anything, including purses and jewelry, which his wife and daughter greatly appreciated. In his later years, Don and his wife Carolyn were able to do a bit of traveling. Don always said before a trip that they "were off to see the wizard." Don was particularly fond of their trip to Alaska and thought it to be one of the most beautiful places on the planet. A graveside service will be conducted for Mr. Simmons on Wednesday, April 21, 2021, at 2:00 pm in the Liledoun Baptist Church Cemetery. Staff of Alexander Funeral Service will be officiating. A memorial book will be available at Alexander Funeral Service for family and friends to sign April 19, and 20, 2021, 9:00 am – 5:00 pm and April 21, 2021, 9:00 am – 12:00 pm. The Simmons’s Family wish to extend a special thank you to Alexander Hospice and ask that donations be made to them in lieu of flowers.

The family of Don Franklin Simmons created this Life Tributes page to make it easy to share your memories.

Send flowers to the Simmons family.