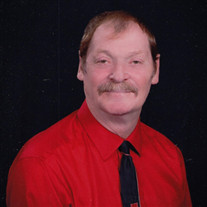 Donald Ray Arrowood, age 70, passed away at his residence on December 22, 2019. Born to the late Alvin and Lois Barger Arrowood. Donald served in the US Army during the Vietnam era, was a member of Liledoun Baptist Church and was an avid fisherman. In... View Obituary & Service Information

The family of Donald Ray Arrowood created this Life Tributes page to make it easy to share your memories.

Donald Ray Arrowood, age 70, passed away at his residence on...

Send flowers to the Arrowood family.