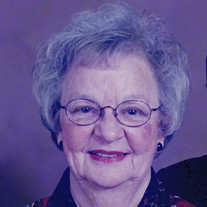 Elizabeth “Lib” Price Shoemaker passed away on December 20, 2021. Lib was born in Taylorsville on October 28, 1932, to the late Jeff and Neva Payne Price. She was united in marriage to Howard Shoemaker on February 22, 1953. He preceded her in death on October 25, 2019, after 66 years of marriage. Lib was a 1951 graduate of Hiddenite High School where she was elected by her fellow classmates as Miss Hiddenite during her Senior year. Lib and Howard established T-Sport from 1982 until they retired in 1996. She and Howard were charter members of the Emerald Squares, square dancing club. Lib was a past member of The Taylorsville Lions Club which she served as the first female President. She was a member of Three Forks Baptist Church. Lib had numerous interests. She loved playing cards with family and friends, working crossword and jigsaw puzzles, cooking wonderful meals for her family and she faithfully read her Bible. She enjoyed bird watching all kinds of birds from her backyard feeders and was a lifelong fan of the Atlanta Braves, but most importantly she loved spending time with family and friends. Along with her parents and husband, she was preceded in death by six brothers and four sisters. Those left to cherish her memory are two daughters, Crystal Yamnitz (Rusty) of Taylorsville and Twyla Carr (Mike) of Columbia, MO., her son Jock Shoemaker of Chicago, IL. Two grandchildren, Brandon Yamnitz of Davidson, NC and Emily Carr of Columbia, MO, one great grandson, Andrew Yamnitz of Davidson, NC, one sister-in-law, Brenda Price of Taylorsville, along with a number of nieces and nephews. A memorial book will be available Wednesday, December 22, 1:00 pm – 5:00 pm and Thursday, December 23, 2021, 9:00 am – 12:30 pm at Alexander Funeral Service. A graveside service will be held at Three Forks Baptist Church on Thursday, December 23, 2021, 2:00 pm at Three Forks Baptist Church. Pastor George Holloman will be officiating. Pallbearers will be her nephews. In lieu of flowers, the family request that memorials be given to the Habitat of Humanity of Alexander County, 294 E. Main Ave, Taylorsville, NC 28681 or Gideons International, PO Box 517, Taylorsville, NC 28681 Funeral arrangements have been entrusted to Alexander Funeral and Cremation Service. Condolences may be sent to www.alexfuneralservice.com

The family of Elizabeth "Lib" Shoemaker created this Life Tributes page to make it easy to share your memories.

Send flowers to the Shoemaker family.