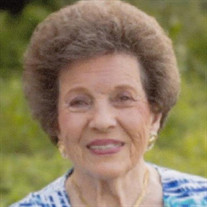 Emma Marie Sipe, age 92 of Taylorsville went to her heavenly home Wednesday, September 9, 2020 after a long illness, she passed at her home, surrounded by her loving family. She was a member at St. Luke Lutheran church and was very involved... View Obituary & Service Information

The family of Emma Marie Sipe created this Life Tributes page to make it easy to share your memories.

Emma Marie Sipe, age 92 of Taylorsville went to her heavenly...

Send flowers to the Sipe family.