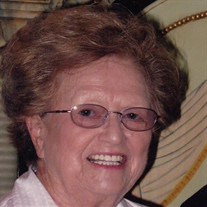 Willie Fern Matheson, 86, died at Catawba Valley Medical Center on January 14, 2020 after several years of declining health. Fern was born on April 7, 1933 to the late James Perry Pennell and Tressie Vee Brown Pennell of Taylorsville, NC. Fern married Franklin Boyd Matheson in 1953, and they resided in Hiddenite. Fern worked for Broyhill Industries as a seamstress for 34 years. She had many interests including gardening, cooking, family, and her beloved companion Ellie. She is preceded in death by her husband of 59 years, Boyd, and a granddaughter, Maggie Lauren Matheson as well as a sister, Ethel Mae (Bob) Cranford of Taylorsville, and a brother, James Harold (Helen) Pennell of Taylorsville. She is survived by a daughter, Sharon (Dwight) Frye, Joseph Scott Matheson of Hiddenite and his son, Joshua Lee of Taylorsville, and David Andrew (Pam) Matheson of Hickory. In addition, Fern is survived by six siblings: Shirley (Mason) Faires of Taylorsville, Phyllis (Jerry) Blankenship of Taylorsville, Lorean (Jack) Little of Claremont, Barbara (Jerry) Mitchell of Taylorsville, Jimmy (Barbara Ann) Pennell of Lenoir, and Linda Pennell of Todd. Funeral arrangements are entrusted to Alexander Funeral Service, and condolences may be made online at http://www.alexfuneralservice.com/. Memorials may be made to the Epilepsy Foundation of North Carolina at https://donate.epilepsy.com/donate. The family will hold a graveside service at Taylorsville City Cemetery on East Main Avenue (Hwy 90) at 1:00 p.m. on Friday, January 17. Funeral arrangements have been entrusted to Alexander Funeral and Cremation Service. Condolences may be sent to www.alexfuneralservice.com

The family of Fern Matheson created this Life Tributes page to make it easy to share your memories.

Send flowers to the Matheson family.