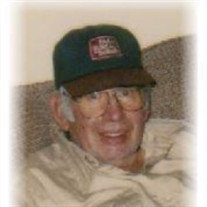 Flake Herman Clanton, age 86 of Statesville passed away on Sunday, June 28, 2020 at Gordon’s Hospice in Statesville, after a period of declining health. Mr. Clanton was a native of Alexander County, born June 6, 1934, son of the late Edward S. and Grace M. Clanton. He was a retired farmer, carpenter and plumber spent much of his time working for Alan Lackey Plumbing and Hope Brothers Builders. Whenever possible he could be found outdoors. Hunting and fishing were his favorites. He was a devoted caregiver to his son Stephen. Mr. Clanton was preceded in death by his wife, Mary M. Clanton and most recently his son, Stephen Clanton. He was also proceeded in death by his sisters, Wilma C. Lambert, Edna M. Clanton and Reba Clanton, his brother Hubert M. Clanton and brother-in-law Fred D. Lambert and other family members. He is survived by two sisters-in-law, several nieces, nephews, great-nieces and great-nephews. Levi Lambert, Tony Clanton, Bill Masters and Nelson Dellinger were special caregivers to Herman during his last days at home. No formal family visitation will be held due to Covid -19 concerns. The body will lie in state at Alexander Funeral Service of Taylorsville on Wednesday, July 1, 2020 from 9:00 am until 5:00 pm and Thursday, July 2, 2020 from 9:00 am until 5:00 pm at Alexander Funeral Service. A graveside service will be held on July 3, 2020 at 11:00 am at Pisgah United Methodist Church Cemetery. Rev. Mike Duncan and Rev. Joey Campbell will officiate the service. Memorials may be given to Pisgah United Methodist Church Building Fund C/O Jonathan Harris, 178 Hill Farm Road, Hiddenite N.C. 28636 Funeral arrangements have been entrusted to Alexander Funeral and Cremation Service. Condolences may be sent to www.alexfuneralservice.com

Flake Herman Clanton, age 86 of Statesville passed away on Sunday, June 28, 2020 at Gordon&#8217;s Hospice in Statesville, after a period of declining health. Mr. Clanton was a native of Alexander County, born June 6, 1934, son of the late... View Obituary & Service Information

The family of Flake Herman Clanton created this Life Tributes page to make it easy to share your memories.

Flake Herman Clanton, age 86 of Statesville passed away on Sunday,...

Send flowers to the Clanton family.