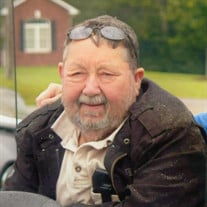 Gary Lavon Hall age 67 of Taylorsville passed away on Friday evening, July 9, 2021. Gary was born January 20, 1954, to the late Melvin “Buck” and Lois Crouch Hall in Catawba County. Gary worked as an auto mechanic until he retired at Richey’s Automotive. He was a member of Mt. Bethel United Methodist Church, he enjoyed motorcycles, fishing, working on cars, and spending time with his grandchildren. Gary served his community, first by volunteering for the Bethlehem Fire Department and then serving for sixteen years for the Alexander County Rescue Squad. In addition to his parents, Gary was preceded in death by his daughter, Kristi Fulbright who gave him eighteen additional years of love and life by donating her kidney to him. Those left to cherish and share the memories of Gary include his wife of forty-three years, Mary Childers Hall, daughter, Sharon Hall, two sisters, Lois Ann Bowman and husband Larry, Joy Lea Moretz, brother, Royce Hall and wife Brenda, three grandchildren, Austin Fulbright, Meredith Fulbright, and Nekoda Hicks, along with a number of nieces and nephews. Gary will also be missed by his beloved dog “Cricket”. Visitation for Mr. Hall will be conducted on Tuesday, July 13, 2021at Alexander Funeral Service from 3:00 pm until 5:00 pm. A graveside service will follow in the Mt. Bethel United Methodist Church Cemetery at 6:00 pm. Members of the Alexander County Rescue Squad will serve as pallbearers. In lieu of flowers donations may be made to American Kidney Fund @ 11921 Rockville Pike, Suite 300 Rockville, Maryland 20852 or to the Braxton Smith Foundation Inc. 5876 NC Hwy 16 S, Taylorsville, NC 28681. Funeral arrangements have been entrusted to Alexander Funeral and Cremation Service. Condolences may be sent to www.alexfuneralservice.com

The family of Gary Lavon Hall created this Life Tributes page to make it easy to share your memories.

Gary Lavon Hall age 67 of Taylorsville passed away on Friday...

Send flowers to the Hall family.