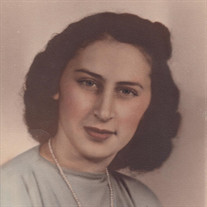 Goldie Barnes Harrington, 89, passed away on March 9, 2021. She was born in Taylorsville, NC on June 19, 1931 to the late Charlie Alexander Barnes and Eula Mae Harrington Barnes. She was the youngest in a family of nine children. She attended Oxford School and made lifelong friends. She met and married the love of her life John Wayne Harrington. They were married for 70 years until his death two years ago. Goldie is survived by her five children, Larry Harrington (wife Jaretta) of Claremont, NC, Martha Brewer (husband Lindsey) of Cherryville, NC, Beverly Johnson (husband Mike) of Statesville, NC, Sharon Harrington of Kernersville, NC, and Sarah Crouse (husband Tommy) of Hudson, NC. She is also survived by 6 grandchildren, James Harrington (Erin Gulick), Joni Harrington all of Claremont, NC, Lynn Johnson (wife Alisha) of Statesville, Charles Dyson (wife Christy) of Greensboro, NC, Bryan Crouse (wife Christy) of Taylorsville, NC, David Crouse of Granite Falls, NC. Goldie was the proud great grandmother to Trent, Lanie and Cooper Crouse of Taylorsville, NC, Xander and Emma Dyson of Greensboro, NC, Cana Gulick of Claremont, NC, and Lyndsey, Alexis, and Lauren Johnson of Statesville, NC. She leaves behind two sisters-in-law, Gladys Hayes of Sweet Home, Oregon, Evelyn Harrington of Statesville, NC and many nieces and nephews. Goldie was a lifelong member of Three Forks Baptist Church serving in many areas of the church including Training Union, VBS and WMU. The most important thing was always having her five children in the church whenever the doors were open. One of the final things she was able to do was sing My Jesus I Love Thee. Goldie was a faithful member of her Sunday School class and she will be remembered for her love of family and her pleasure in cooking for them. Mrs. Harrington’s body will Lie-in-State at Alexander Funeral Service on Wednesday, March 10, 2021 from 1:00 pm – 8:00 pm and Thursday from 9:00 am – 1:00 pm with the funeral service following at Three Forks Baptist Church beginning at 3:00 pm. Dr. Carson Moseley and Rev. Mark Robinette will officiate. The family wishes to express our deepest appreciation for all the kindness and love shown to our Mom.

Goldie Barnes Harrington, 89, passed away on March 9, 2021. She was born in Taylorsville, NC on June 19, 1931 to the late Charlie Alexander Barnes and Eula Mae Harrington Barnes. She was the youngest in a family of nine children. She attended... View Obituary & Service Information

The family of Goldie Barnes Harrington created this Life Tributes page to make it easy to share your memories.

Send flowers to the Harrington family.