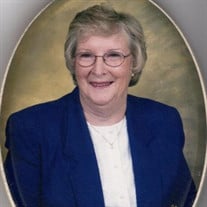 Mrs. Irene Pace Ferguson Blackburn, 88, of Statesville transitioned peacefully to her heavenly home surrounded by family and in the arms of her girls, Saturday, June 19, 2021 at her residence. She was born in Alexander County, Hiddenite, NC, on August 31, 1932 and was the daughter of the late Ernest Raymond Pace and Rosalee Teague Pace. In addition to her parents, Mrs. Blackburn was preceded in death by her first husband, Harvey L. Ferguson, who died in 1958 and second husband, Walter G. Blackburn, who died in 1980, and one sister, Lorene Pace Myers. She was a graduate of Clevenger Business College and Hiddenite High School. She was a retired Trial Court Administrator with the State of North Carolina, Twenty-second Judicial District for 23 years. Mrs. Blackburn was a member of First Baptist Church and a former member of Front Street Baptist Church for forty-two years where she served on many various committees including president of the WMU (Women’s Missionary Union), Sunday school teacher and Sunday School Youth Department leader. Mrs. Blackburn was awarded North Carolina’s highest civilian honor, The Order of the Long Leaf Pine in 1999 by then Governor James B. Hunt, Jr., during her retirement ceremony. She was a 50 year member of The Order of The Eastern Star, Statesville Chapter #214, where she served as Worthy Matron for nine terms. She was a Charter member of Statesville Noon Civitan Club; member of Statesville Civitan Club; member and past state president of North Carolina judicial Support Staff; member and past president of North Carolina Legal Support Staff; member and past president of Legal Support Staff of Iredell County and a member and past president of Metrolina Charter Chapter of The American business Women’s Association. Mrs. Blackburn also was a past member and secretary of Statesville Civil Service Board for multiple terms; member and Chairman of Iredell County Jury Commission for multiple terms and a member of the Board of Elections 4th precinct. Those left to cherish her memory are children, Steven Lee Ferguson and wife, Honeylhona of Rawlins, WY; daughters, Melissa Dawn Blackburn Geter and husband, Clifton of Vicksburg, MS and Tamara Leigh Blackburn Beehler and husband Mike of Statesville, NC. She is further survived by her grandchildren, Kelly Rae Gregory, Whitney Michelle Grubb and husband, Jordan, Eric Matthew Hinceman and wife Holly, Sabra Elizabeth Walton, David Ferguson and wife Erminia, and Jacob Ferguson and wife Wendy; and great-grandchildren, Riley Shay Archer, Carter Champion Hinceman, Adley Reese Grubb and Gemma Leigh Hinceman. Her sisters, Eloise Davis, Mary Lois Dodson, Betty Julian and Patricia Dishman along with her brother David Pace and several extended family members also survive. The family will receive friends Saturday, June 26, 2021 from 3:00 PM – 6:00 PM at Bunch-Johnson Funeral Home. The funeral service will be held Sunday, June 27, 2021 at 2:00 PM at First Baptist Church of Statesville with Rev. Dr. Nelson Granade officiating. Burial will follow at Oakwood Cemetery. For those who are not able to attend in person, the service will be live streamed on First Baptist Statesville YouTube page. In lieu of flowers, memorial donations are requested to be made to Hospice & Palliative Care of Iredell County 2347 Simonton Road Statesville, NC 28625. Condolences may be left online for the family at www.bunchjohnsonfuneralhome.com. Courtesy obituary by Alexander Funeral and Cremation Servcie Bunch-Johnson Funeral Home is honored to be serving the Blackburn family.

Mrs. Irene Pace Ferguson Blackburn, 88, of Statesville transitioned peacefully to her heavenly home surrounded by family and in the arms of her girls, Saturday, June 19, 2021 at her residence. She was born in Alexander County, Hiddenite, NC,... View Obituary & Service Information

The family of Irene Pace Ferguson Blackburn created this Life Tributes page to make it easy to share your memories.

Send flowers to the Blackburn family.