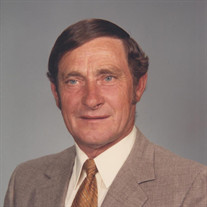 On Sunday, September 6, J.D. St.Clair went home to be with his Lord and Savior, Jesus Christ. He was born, February 25, 1928 to parents Roby and Ola St.Clair. He was saved in 1948 at the fall revival at Mt. Hebron Church. He married Florence Burgess in February 1950. The Lord gave them seventy years together. We praise the Lord! She survives him. During their years together they have worshiped together, they have enjoyed traveling with friends, going to music shows, and working garden together. He enjoyed picking the banjo. He has always enjoyed hunting and fishing. He was a member of Three Forks Baptist Church. He gave out chewing gum at church to two generations of children. He worked for Alexander County School Maintenance Dept. during the years that schools changed from coal heating to modern heating and cooling. He retired in 1996. Even as his health gave way, he still wanted to help people. He often said, “If I can do anything for you, let me know.” He has been in declining health for several Years. In addition to his parents he was preceded in death by three brothers, Arlie, Clyde and Glade St. Clair, five sisters, Edna Mitchell, Margie Burgess, Marie Berry and Clara Warren, also an infant sister Josephine St. Clair. He is also survived by daughter, Dianne Mecimore and husband Michael, grandson, Josh Bowman and friend Becky Downey, step-grandchildren, Jason and Misty Mecimore, Chad and Cathy Mecimore, and seven great-grandchildren. One brother, Curtis St.Clair (Doris), brother-in-law, Max Burgess (Thelma), four sisters-in-law, Sue Childers, Vivia Cline, Casino Bentley, and Vernell Sharpe, also a great number of nieces and nephews. For the past eleven months he has been in a nursing home. He often told the workers he loved them, and they loved him, and they took such good care of him. He was a good Christian witness there, often inviting fellow residence to come to his church, telling others he loved them. In lieu of flowers, the family request donations be made to Samaritan's Purse/Donor Ministries P.O. Box 3000 Boone, NC 28607., or Gideon's International, PO Box 517, Taylorsville, NC 28681 or Alexander County Crisis Center. Mr. St.Clair’s body will lie-in-state at Alexander Funeral Service on Wednesday, September 9, 2020 from 9:00 am until 5:00 pm and Thursday, September 10, 2020 from 9:00 am until 3:00 pm. The funeral service for Mr. St. Clair will follow at 5:00 pm on Thursday at Three Forks Baptist Church. Dr. Carson Mosely and Rev. Mark Robinette will officiate. Burial will be in the Three Forks Baptist Church Cemetery. Funeral arrangements have been entrusted to Alexander Funeral and Cremation Service. Condolences may be sent to www.alexfuneralservice.com

On Sunday, September 6, J.D. St.Clair went home to be with his Lord and Savior, Jesus Christ. He was born, February 25, 1928 to parents Roby and Ola St.Clair. He was saved in 1948 at the fall revival at Mt. Hebron Church. He married Florence... View Obituary & Service Information

The family of J.D. St. Clair created this Life Tributes page to make it easy to share your memories.