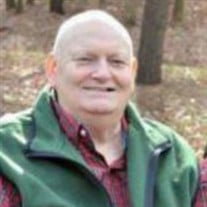 James Carl “Buddy” Picha, 80 passed away, November 13th in Taylorsville, NC after a brief illness. He was the widower of Marie “Rita” Picha. The graveside service and internment will be held at Dudley Shoals Baptist Church in Granite Falls, NC on Tuesday, November 17 at 3:00 with Rev. Gordon West officiating. Born on February 21st, 1940, Buddy was the son of Leonard Anton Picha, Sr. and Glenys Burley Picha in Richmond, Va. He graduated from John Marshall High School in Richmond, VA. He began an early grocer career in high school with AP Grocers. In 1962, he married Rita. They shared more than 50 years of marriage together. Buddy and Rita adventured to Charlotte, NC in 1969. Once moving to Charlotte, NC he continued his career with Harris Teeter, Associated Grocers and Stevens Produce. He had exceptional knowledge of what was best “in season” and relished any baked good featuring the season’s best. He was a member of Pleasant Plains Baptist Church in Matthews, NC and Open Book Baptist church in Monroe, NC. Once moving to Hickory, he joined Grace Baptist Church. Buddy loved sports including his Nascar Races and Carolina Panther football. If he was not watching one of his favorite teams, he enjoyed Hallmark Movies, especially Christmas. He will be remembered for his kindness and jovial nature and is best known for shopping for the “best deal”. He was a brother, husband, Dad, Pop, Pawpaw, Pop-Pop and many more, but always everyone’s Buddy. He is survived by his brother, Leonard Picha, Jr (Terry), children Rhonda Holman (Donnie), and Chris Picha (Courtney), his granddaughter Rebecca Starnes (Michael), his great grandson, Christian Starnes, sister-in-law Joyce Brizendine (Bobby) and beloved grand-puppy Noelle, along with many nieces and nephews. He was predeceased by his parents, his wife Rita Picha, sister Judy Bedner and brother-in-law William “Bill” Weade. Buddy often left each family or friend with a big smile and this simple statement: “glad you got to see me today” and we always responded, we sure are. You will be solely missed and deeply loved until we meet again in heaven. The family request that in lieu of flowers, donations be made to Dudley Shoals Baptist Church general fund, 1882 Dudley Shoals Rd, Granite Falls, NC 28630. Services have been entrusted to Alexander Funeral and Cremation Service, were condolences may be sent to www.alexfuneralservice.com.

James Carl &#8220;Buddy&#8221; Picha, 80 passed away, November 13th in Taylorsville, NC after a brief illness. He was the widower of Marie &#8220;Rita&#8221; Picha. The graveside service and internment will be held at Dudley Shoals Baptist... View Obituary & Service Information

The family of James Carl Picha created this Life Tributes page to make it easy to share your memories.

Send flowers to the Picha family.