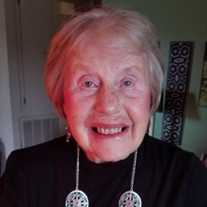 Jane O. Mohney, age 98, of Bethlehem, NC passed away on Friday, May 7, 2021 at Trinity Ridge in Hickory. Born on March 3, 1923 in Syracuse, NY, she was the daughter of the late Samuel B. and Helen (Bourne) Kirkpatrick. She was a graduate of North Rose High School and State University of New York at Cobleskill where she majored in food service. In 1943 she was a dietician at Highland Hospital in Rochester, NY. Jane and her late husband William H. Mohney married July 10, 1944 in Lyons, NY. After his army service, they lived in Ithaca, NY where he attended Cornell University. In 1950 William took a teaching position at York Central School in Retsof, NY. During his 30 years he taught agriculture, science, and biology. The Mohney family lived in Butere, Kenya for two years where William taught science at Butere Girl’s School. This was a relationship with the Episcopal Church and the Diocese of Maseno, Kenya. During his retirement William and Jane served in the Peace Corps in St. Lucia in the Caribbean. Upon their return they moved to Hickory, NC to establish the Hickory Bed and Breakfast which they operated until 1991 when they moved to Bethlehem, NC. Along with her husband she is preceded in death by her sister Mildred Kirkpatrick. She is survived by her children Susan of La Mesa, California; David (Bonita) of New York City, New York; Stephen of Brooklyn, New York; Kirk (Melanie) of Gardiner, Maine; grandson, Zachary Mohney; and granddaughters, Emma and Helen Mohney. Scattering of her cremains will be scheduled at a later date at Dell Memorial Garden at The Church of Ascension in Hickory NC. Memorial contributions may be made to SUNY Cobleskill Foundation, State University of NY; College of Agriculture and Technology, Cobleskill NY 12043. Covid 19 restrictions apply to all funeral services.

Jane O. Mohney, age 98, of Bethlehem, NC passed away on Friday, May 7, 2021 at Trinity Ridge in Hickory. Born on March 3, 1923 in Syracuse, NY, she was the daughter of the late Samuel B. and Helen (Bourne) Kirkpatrick. She was a graduate of... View Obituary & Service Information

The family of Jane O. Mohney created this Life Tributes page to make it easy to share your memories.

Send flowers to the Mohney family.