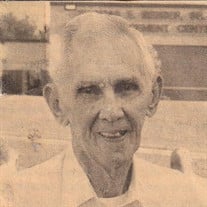 Joe James, age 88, of the Sugar Loaf Community, Taylorsville, passed away in Caldwell Hospice on Wednesday, February 12, 2020. Born May 28, 1931 to the late Perry Lee and Hessie Coffee James in Wilkes County, he was a graduate of Taylorsville High School. Mr. James also received a Certificate in Corrections from East Carolina University. He was a veteran of the United States Army, where he had served two years of active duty during the Korean Conflict and upon returning, served three years of active reserve. Joe was well remembered for serving as Chief Deputy Sheriff in Alexander County and as Chief of Police for the town of Taylorsville. He retired as Superintendent of the Alexander Prison Camp, for the North Carolina Department of Corrections. In retirement he was known far and wide as Auctioneer for James Auction Service. He was especially proud of and loved his wife, children, grandchildren and great grandchildren. He enjoyed gardening, woodwork and fishing for past times. In addition to his parents, he was preceded in death by a daughter, Sandra James Albert, as well as a brother, Ned James and sister Lena Belle Bentley. He is survived by his wife, Doris June Fortner James of the home. One son survives, Joseph Randall “Randy” {Kathy Dyson} James. Three grandchildren fondly remember him: Nathan and Jonathan James and Chris Albert. Six great grandchildren survive: Makayla, Jordan, Addee, Jase, and Jake James, as well as Avia Albert Hendrix, along with, a number of nieces and nephews. Visitation will be held on Saturday, February 15, 2020 from 10 to 11:00 a.m. at Little River Baptist Church, with graveside services at 11:00 a.m. The Rev. Jeff Chapman and Gary W. Jennings will officiate. Military rites will be afforded by Alexander County Military Honor Guard. Memorials may be made to Caldwell Hospice, 526 Robbins Wood Place, Hudson, NC. 28638. Funeral arrangements have been entrusted to Alexander Funeral and Cremation Service. Condolences may be sent to www.alexfuneralservice.com

Joe James, age 88, of the Sugar Loaf Community, Taylorsville, passed away in Caldwell Hospice on Wednesday, February 12, 2020. Born May 28, 1931 to the late Perry Lee and Hessie Coffee James in Wilkes County, he was a graduate of Taylorsville... View Obituary & Service Information

The family of Joe James created this Life Tributes page to make it easy to share your memories.

Send flowers to the James family.