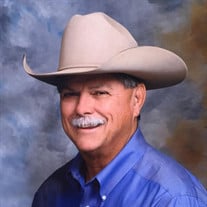 John “Johnny” Clark Bruce, age 71, passed away Thursday, July 29, 2021 surrounded by family and friends following a heart attack Monday, July 26, 2021. He was born Monday, October 3, 1949 to the late Bill and Luna Gooden Bruce of Alexander County. Johnny graduated with a Master of Arts in Education from Appalachian State University in 1973. He then taught at Taylorsville Elementary School for ten years and began his career in NASCAR with Harry Gant’s Racing Team in the Sportsman Series. He went on to spend the bulk of his career as a manager in events and promotions with the US Tobacco Company for Skoal Bandit Racing and Copenhagen Skoal Rodeo. Johnny later returned to Alexander County and continued his career in the Alexander County School System as a teacher and coach until retirement. Johnny was a man of many hats. He enjoyed coaching, teaching, volunteering, golfing, NASCAR, rodeos, Dodger baseball, and spending time with family and friends. Johnny was very involved in the community throughout many different clubs and volunteer organizations. He was President of the Sports Hall of Fame Selection Committee and organized the Alexander County Public Education Foundation Golf Tournament, raising money for teacher grants in the county. Johnny was also President of the Hiddenite Arts and Heritage Center and volunteered at the Mobile Café. Those left to cherish the memories of Johnny include his wife of 27 years, Greta Miller Bruce, daughters, Lillie Ann Bruce, Corrie Bruce Ward, and son-in-law Kevin Ward. Honorary daughter, Heather Misenheimer, son-in-law Danny, and grandson Connor Wayne Misenheimer, along with a number of nieces, nephews, cousins, in-laws, out-laws and a multitude of “buddies” he loved like family. Friends and family are invited to gather at the Alexander Central High School Cafeteria Sunday, August 1, 2021 from 2:00 pm to 4:15 pm for a light reception. A memorial service will follow in the Alexander Central High School Auditorium at 4:30 with the Rev. Chris Meade officiating. In lieu of flowers, donations may be made to the Hiddenite Arts and Heritage Center at 316 Hiddenite Church Road, Hiddenite, NC 28636 or online at www.hiddenitearts.org/donate/ Funeral arrangements have been entrusted to Alexander Funeral and Cremation Service.Condolences may be sent to www.alexfuneralservice.com

The family of John "Johnny" Clark Bruce created this Life Tributes page to make it easy to share your memories.

Send flowers to the Bruce family.