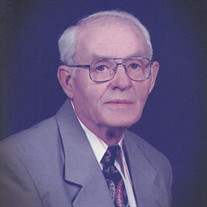 Johnson L. Ritchie Former Town of Taylorsville Police Chief Johnson L. Ritchie (Chief Ritchie), 92, of the Bethlehem community in Taylorsville, went peacefully to be with his heavenly father on Saturday, May 2, 2020, at his residence. He was born December 6, 1927, in Alexander County, the son of the late Plumer (P.L.) and Ida Veola Yount Ritchie. He was an active member of Fellowship Advent Christian Church (FACC) where he and his friends sat in the vestibule each Sunday morning to speak with attendees. Mr. Ritchie, along with other carpenters, helped build the second FACC and numerous other homes and buildings in both Alexander and Catawba counties. He was an excellent carpenter, brick and rock mason, farmer and mechanic. He was a champion for the less fortunate – freely sharing help, money and food from his giant garden, while expecting nothing in return. He believed in a hard day’s work for a hard day’s pay and worked from dawn to dusk every day except Sunday. Mr. Ritchie was known for his quick wit and humorous stories from years past. He often reminisced of when Hwy. 127 was a dirt road, with no bridge crossing from Alexander into Catawba County. Sitting beside his ‘Dad’ in their horse-drawn wooden wagon filled with fresh family-farm produce, the two crossed the Catawba river for the day-long trip to sell or barter with local Hickory businesses. Mr. Ritchie was a devoted son to both his ‘Dad’ and ‘Mom’. Mr. Ritchie was drafted at the age of 18 in 1945 and served his country during the end of WWII in Kyoto, Japan. He was assigned to the Occupational Forces and drove a staff car for Col. Frank Partridge. He and the Colonel remained friends many years after the war. Once home from the war, Mr. Ritchie completed courses in both farming and mechanics thru the GI Bill. He continued his service to others in 1967 as an Alexander County Deputy Sheriff and was later hired as the Chief of Police for the Town of Taylorsville where he served from 1971 until 1992. Commonly referred to as ‘Chief’, Ritchie walked the streets of Taylorsville each day to visit with local business personnel and shoppers to stay abreast of local happenings and help keep the Town of Taylorsville safe. He was known for not writing many citations but rather discussing infractions and giving people a ‘break this time but you’ll get a ticket next time’. He was respected by both his deputies and the locals. The Chief always saw his position as both an honor and a duty. Upon retirement, Mr. Ritchie stayed active spending the majority of his time doing his love of farming and working along side his son, Dennis, on the family saw mill. He loved good home cooking and visiting with and from special friends including Ned Bowman, Floyd Newton, Leo Reese, Glenn Ritchie, and Creolla “Tootsie” Jones. He wore his WWII Veterans hat with pride and relished receiving accolades for his service. Mr. Ritchie worked very hard to provide for and take care of his family. He was very proud of their individual accomplishments and always looked forward to their visits, after which they usually left with something fresh from the garden, candy or chewing gum. He was a wonderful father, grandfather, great-grandfather and friend – all of whom loved him very much. He will be missed by all. In addition to his parents, he was preceded in death by his wife, Edith Crouch Ritchie; three brothers, Clyde, Cloyd and Ray Ritchie; and six sisters, Effie Benfield, Cleo Miller, Lela Annas, Mattie Starnes, Mary Richey and Jeanette Carrigan. Among those left to cherish his memory include his son, Dennis Ritchie and wife, Carolyn; daughters, Brenda Jones and husband, Tom, and Donna Hollar; grandchildren, Dinah Brown and husband, Danny, Matthew Hollar, Andrew Hollar, Patrick Hollar and wife, Mattie, Crystal Webb and husband, Dale, and Marie Ritchie; great-grandchildren, Leyton Brown, Collin Brown and Parker Hollar; two sisters, Naomi Newton and Ethel Richey; one brother, David Richey, and numerous nieces and nephews. Chief Johnson L. Ritchie will lie in state for public viewing at Alexander Funeral Service on Tuesday, May 5, and Wednesday, May 6, between the hours of 9:00 am – 5:00 pm and Thursday, May 7 from 9:00 am – 12 o’clock noon. The private family funeral service will be held on Thursday, May 7, at 2:00 at Fellowship Advent Christian Church with the Revs. David Ross, Bill Coughlin, Gary Jennings and Tom Jones officiating. Live streaming of the service will be available on Facebook at fellowshipadventchristianchuch page at 2:00 pm with a 40 second delay. A 3:00 public burial service will follow in the church cemetery. Serving as pallbearers will be the current Alexander County Sheriff, Chris Bowman; current Town of Taylorsville Police Chief, Doug Bowman; former Town of Taylorsville Police Chief, Dennis James; former Town of Taylorsville police Chief, Tony Jones; police officer Gordan Knight; former police officers Todd Jones, Mark Sharpe and Kermit Sipe. Alexander Funeral and Cremation Service is serving the Ritchie family. Condolences may be sent to www.alexfuneralservice.com

The family of Johnson L. Ritchie created this Life Tributes page to make it easy to share your memories.

Send flowers to the Ritchie family.