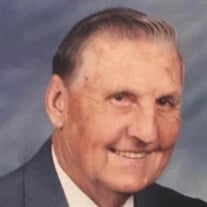 Kenneth Thompson Patterson, age 94 or Taylorsville, passed away peacefully at home, surrounded by his family on Wednesday evening, October 7, 2020. Funeral services will be conducted on Saturday, October 10, 2020 at 2:00 p.m. at First Baptist Church in Taylorsville, with Rev. Dan Redding and Rev. Gary W. Jennings officiating. The body will lie in state at Alexander Funeral Service on Friday, October 9 from 10:00 a.m. until 5:00 p.m. and on Saturday, from 9:00 a.m. until noon. Mr. Patterson was born on December 3, 1925, in Alexander County to the late Arthur Quintis and Vanona Crouch Patterson. Kenneth was Director of the Alexander County Agriculture Extension Service until his retirement, having served for thirty years. A veteran of WW II, serving in the United States Navy, he was an active member of First Baptist Church, Taylorsville, where he had served in numerous capacities, among which he was a Sunday school teacher and served as deacon. He was a model of a Man of God, both in the community and his family. The annual family Beach Trip was the highlight of the summer. He was a master gardener and accomplished handyman. He loved to play golf, with a group of close friends. In addition to his parents he was preceded in death by three sisters; Alma Goble, Juanita Smith, and Francis Bunton, along with four brothers; James, Quentin, Willard, and Fredrick Patterson. He is survived by his wife, Joyce Patterson of the home, as well as two daughters, Joy Gardner {Hughey} of Hiddenite, and Cindy Rowe of Apex. One son survives, Gary Patterson {Jennifer} of Taylorsville, There are eight grandchildren, Emily Hill {Jeremy} of Taylorsville, Joshua Gardner {Ashley} of Statesville, Sam Gardner of Hiddenite, Ben Gardner of Hiddenite, Alex Rowe, of Apex, Courtney Rowe, of Apex, Spencer Patterson, of Cary, N.C. and Carter Patterson of Chapel Hill , NC. Two great grand children survive, Wade and Freddie Hill, both of Taylorsville. Mr. Patterson has a twin brother who survives, Kermit Patterson of Stony Point, and several nieces and nephews survive. The family wishes to thank Anna Pennell, Diane Livingston, Cathy Lackey, along with Hospice of Alexander County and Kelsey Anderson with Hospice for their special care. Memorials may be sent to Hospice of Alexander County, 50 Lucy Echerd Ln. Taylorsville, NC 28681 or First Baptist Church, PO Box 305, Taylorsville, NC. 28681. Services have been entrusted to Alexander Funeral and Cremation Service, were condolences may be sent to www.alexfuneralservice.com.

Kenneth Thompson Patterson, age 94 or Taylorsville, passed away peacefully at home, surrounded by his family on Wednesday evening, October 7, 2020. Funeral services will be conducted on Saturday, October 10, 2020 at 2:00 p.m. at First Baptist... View Obituary & Service Information

The family of Kenneth Thompson Patterson created this Life Tributes page to make it easy to share your memories.

Send flowers to the Patterson family.