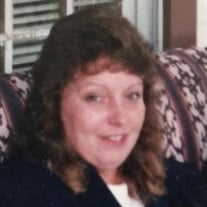 Kimberly Ann Parsons, Age 57 of Taylorsville, passed away on Sunday, February 13, 2022, at Catawba Valley Medical Center. Kimberly was born on Thursday, November 12, 1964, to the late Bobby Ray Smith and Anna Lee Phillips Smith, in Caldwell County. Kimberly formally worked at Friendship Furniture as a sewer. Kimberly enjoyed going to the river, doing crafts, flower gardening, reading, and sewing, but most of all enjoyed spending time with her family and her dog Missy. Including her parents, Kimberly is preceded in death by a brother-in-law, “Sam” Chester and an infant nephew, Nathan Alexander Burton. Those left to cherish the memories of Kimberly, include her fiancé, Jim Pennell, three stepchildren, Tina Williams (Raymond), Whitney Pennell and fiancé Jamie, Tabitha Mays (Kyle). Sisters, Pamela Chester, Donna Michaels (Kevin), and Shannon Burton (Scott). One brother, Alan Ray Smith, along with a number of grandchildren, nieces and nephews. Visitation will be held on Thursday, February 17, 2022, from 6:00pm to 8:00pm at Alexander Funeral Service. Inurnment will be with the family. In lieu of flowers, memorials may be made to Alexander Funeral Service, PO Box 40, Taylorsville, NC 28681. Funeral arrangements have been entrusted to Alexander Funeral and Cremation Service. Condolences may be sent to www.alexfuneralservice.com

The family of Kimberly Ann Parsons created this Life Tributes page to make it easy to share your memories.

Kimberly Ann Parsons, Age 57 of Taylorsville, passed away on...

Send flowers to the Parsons family.