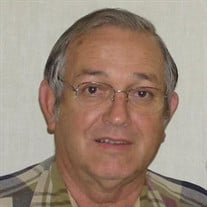 Larry Hugh Bolick, age 77, of Bethlehem passed peacefully into the arms of Jesus surrounded by his family on Friday, March 18, 2022, at Carolina Caring Catawba Valley Hospice House. The baby of nine children, he was the son of the late Carl Wilson and Mary Lou Hall Bolick of Bethlehem. In addition to his parents, he is preceded in death by his brothers Ralph, Willard, Luther, Dwight, Glenn, Lester and Bruce Bolick, his sister Mae Bolick Teague, and in-laws Hayden and Ethel Bowman Shook. Larry first met the love of his life and soulmate, Linda Faye Shook Bolick, when they were two (2) years old at a corn shucking; each holding onto their mother’s aprons and peaking around at each other. They met again in high school where Linda would break her pencil lead just so Larry could sharpen her pencil. They’ve been married for 59 years, and it is said that nieces and nephews often thought their names were “honey” (Larry) and “dear” (Linda) as that is what you heard them call each other. Larry was an upholsterer by trade, building furniture at Vanguard and later at Hancock & Moore. His passion was his cows and honeybees and you often found him up on the farm, in overalls and on his tractor. Running the farm was never a “job” for him; it was pure enjoyment. As a beekeeper for over 45 years, he was a founding member of the Alexander County Beekeepers Association and enjoyed sharing his knowledge on honeybees with people interested in beekeeping. Larry was also known for his love for Duke basketball and enjoyed giving Carolina fans a hard time when Duke would triumph over UNC. Larry was a humble man who loved to show the love of Christ through serving his church and others. He was a life-long active and beloved member of Mt. Bethel United Methodist Church, where he took Sunday School attendance, led the cemetery committee, a member of the choir and the United Methodist Men (UMM). Those left to cherish his memory are his wife, Linda; his children, Dean Bolick (Sheila) of Gastonia, NC and Kathy Bolick (Robert) of Hickory, NC; grandchildren Amelia Barnes (Adam) of High Point, NC, Miranda Bolick of Gastonia, NC, Benjamin Bolick and fiancé Rachel Samuelson of Chesnee, SC, Lydia Bolick of Gastonia, NC and Elijah Bolick of Hickory, NC; brother-in-law Wayne Shook (Rachel); numerous nieces and nephews, great-nieces and nephews, great-great nieces and nephews; farm-hand and friend Daryll Perry, and dear friends Phil and Darlene Huffman, Mary Sayles, Alvania Starnes, Steve and Karen Johnson, Cindy Strout, and Thomas and Melanie Cofer. Visitation will be held on Tuesday, March 22, 2022, from 2:30 pm – 3:45 pm at Mt. Bethel United Methodist Church. Funeral service will follow at 4:00 pm with the Reverend Steve Johnson, Reverend Dale Bost and Reverend Jerry Rogers officiating. Burial will follow in the church cemetery. In lieu of flowers, memorials may be made to Mt. Bethel United Methodist Church, 9042 NC-127, Hickory, NC 28601. Funeral arrangements have been entrusted to Alexander Funeral and Cremation Service. Condolences may be sent to www.alexfuneralservice.com

Larry Hugh Bolick, age 77, of Bethlehem passed peacefully into the arms of Jesus surrounded by his family on Friday, March 18, 2022, at Carolina Caring Catawba Valley Hospice House. The baby of nine children, he was the son of the late Carl... View Obituary & Service Information

The family of Larry Hugh Bolick created this Life Tributes page to make it easy to share your memories.

Send flowers to the Bolick family.