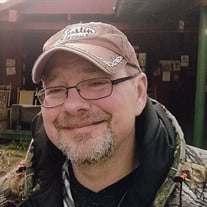 Lee Douglas Deal, Jr. age 43 won his courageous uncomplaining battle with cancer on July 20, 2019 and was awarded eternal life with his Lord and Savior Jesus Christ. Doug was born on July 26, 1975 to Lee and Wanda Shew Deal, Sr., Doug worked with his father at L & D Heating and Air, was a member of Macedonia Baptist church, enjoyed camping, deer and turkey hunting, fishing, spending time with his church and family, being the best son, and the best to all whom he loved and those who loved him. Doug was preceded in death by both of his grandmothers, Margaret Deal and Carfene Shew, also aunt Darlene Polk. Those left to cherish the memory include his parents, Lee and Wanda Deal of Taylorsville, two sons, Dakota Deal and Tristen Pennell of Taylorsville, sister, Christy Bryant and husband Scott Bryant of Taylorsville, niece, Karlee Bryant , grandfather, Lonnie Shew of Taylorsville, uncles and aunts, Gene and Debbie Shew of Lenoir, Jimmy and Glenda Shew of Taylorsville, cousins, Brandon Simmons of Taylorsville, Christopher Shew, Stephine Wilson, Delene Sharpe of Hickory and girlfriend Nicole Fox Pratt of Taylorsville. Visitation for Doug will be Friday, July 26 from 2:00 pm until 3:30 pm at Macedonia Baptist Church with the funeral service following at 3:30 pm. The Reverends Taylor Pennell and Dan Spears will be officiating. Burial will be in the Macedonia Baptist Church Cemetery. Pallbearers will be Anthony McLain, Aron Richards, Chris Shew, Mark Austin, Darrell Morgan and Cameron Stikeleather In Lieu of flowers the family has requested donations be made to Hospice of Alexander County @ Address: 50 Lucy Echerd Ln, Taylorsville, NC 28681 Funeral arrangements have been entrusted to Alexander Funeral and Cremation Service. Condolences may be sent to www.alexfuneralservice.com

The family of Lee Douglas Deal Jr created this Life Tributes page to make it easy to share your memories.

Send flowers to the Deal family.