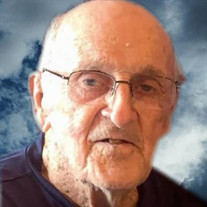 Mack Johnson Treadway, age 92, of the Little River Community passed away on Friday, April 30, 2021 at his residence surrounded by family after a period of declining heath. He was born to the late Rufus William and Alma Catherine Kerley Treadway on June 26, 1928 in Wilkesboro, NC. Mack was of the Baptist Faith and attended First Baptist Church. Mack was a faithful member of the community serving as a county commissioner for eight years, organizer for the Brushy Mountain Golf Course, and one year term on NC Criminal Justice Board. He also served two-year term on Alexander County Social Services Board, charter member of the Taylorsville Jaycees, Captain of the Alexander County Rescue Squad, and chairman of the bloodmobile and cancer drive. He honorably served in the medical corps of the Army from 1950-1952 and was in Korea during this country’s involvement there and made Sergeant in the Army in less than a year. Mack was also the county coroner from 1962-1970, while he worked in the funeral business for 76 years, he served Adams Funeral Home as the President and later served Alexander Funeral Service, where he was still currently Licensed. In addition to his parents Mack was preceded in death by his wife Sandra Gail Smart; son Dr. David Treadway; brother Jack Treadway; sister Gracetine Treadway; sister-in-law Betty Treadway; and brothers-in-law Lewis Parker and Mack Johnson. Those left to cherish the memories of Mack include a daughter Nancy Fox (Todd) of Taylorsville; daughter-in-law Melissa Treadway; adopted son Joe Mitchell; sister Pauline Parker of Concord; four grandchildren: Cody Fox, Daniel Fox (Payton), Lyndsey Treadway, Landon Treadway (Lauren); four great grandchildren: Coulson, Sandler, Aiden and Blakeleigh; along with a number of nieces and nephews. Visitation will be held on Sunday, May 2, 2021 from 6:00 pm – 7:30 pm at Alexander Funeral Service. Funeral Services for Mack will be conducted on Monday May 3, 2021 at 1:00 pm at First Baptist Church in Taylorsville NC with Rev. Mark Robinette officiating. He will lie-in-state one hour prior to service. Burial will follow at the Taylorsville City Cemetery. Memorials may be sent to the Building Fund at First Baptist Church @ Po Box 305; Taylorsville, NC 28681 or to Hospice of Alexander @ 50 Lucy Echerd Lane; Taylorsville, NC 28681. Covid 19 restrictions apply to all funeral services.

Mack Johnson Treadway, age 92, of the Little River Community passed away on Friday, April 30, 2021 at his residence surrounded by family after a period of declining heath. He was born to the late Rufus William and Alma Catherine Kerley Treadway... View Obituary & Service Information

The family of Mack Johnson Treadway created this Life Tributes page to make it easy to share your memories.

Send flowers to the Treadway family.