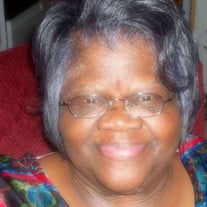 Margaret Rebecca Robinson Barker of Taylorsville age 86 passed away on Monday, February 22, 2021 at her home. Born on September 17, 1934 to the late Crawford Robinson and Victoria Carter Stigger in Crocketts Bluff Arkansas. As well as stepmother... View Obituary & Service Information

The family of Margaret Rebecca Barker created this Life Tributes page to make it easy to share your memories.

Send flowers to the Barker family.