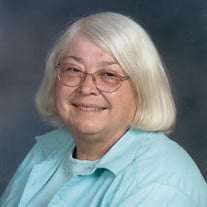 Mary Alice Teague Brown age 72 of Taylorsville, passed away peacefully February 18, 2021. She was born to the late Roscoe David and Mary Jane Catherine Brookshire Teague in Iredell County. Mrs. Brown was of the Christian faith and was a member of Antioch Baptist Church since a child. She graduated from Lenoir Rhyne College with a bachelor’s degree in 1969 and later on a master’s degree in Early Childhood Education in 1981. Mrs. Brown then went on to teach at Ellendale School for numerous years and then worked at the technical department for Alexander County Schools and worked in that capacity until retirement. She currently worked as the bookkeeper for Apple City Broadcasting and for Alexander Funeral Service. Her hobbies were camping, sudoku, beach trips, and most of all her grandchildren. In addition to her parents, she is preceded in death by an infant brother and sister. Those left to cherish her memories: a husband of 53 years Roger L. Brown, two children: Sandra B. Peebles and Roger Brown Jr. “JR” (Amy), brother Billy Childers, sister Penny Milstead (Randy), six grandchildren: Storm Slape, Kellie Slape (Austin Whitener), Jonathan Brown, Tyler Brown, JT Peebles, Austin Peebles (Alyssa), one great grandchild Jeremiah Slape, along with a number of nieces and nephews, special friends, and honorary grandchildren. Mrs. Brown will lie in state at Alexander Funeral Service Saturday February 20, 2021 from 9 am to 5 pm and Sunday February 21, 2021 at Alexander Funeral Service from 9 am till 1:30 pm. A funeral service will be held Sunday February 21, 2021 at Alexander Funeral Service at 2 pm with the Rev. Mark Morris officiating. Burial will follow in the Antioch Baptist Church Cemetery pallbearers will be Storm Slape, Austin Whitener, Austin Peebles, Jason Milstead, Rhett Miller, and Billy Childers. In lieu of flowers donations may be made to Harry’s Helping Hands at Antioch Baptist Church at 580 Antioch Church Road, Taylorsville, NC 28681. Covid-19 restrictions apply to all services. Funeral arrangements have been entrusted to Alexander Funeral and Cremation Service. Condolences may be sent to www.alexfuneralservice.com

Mary Alice Teague Brown age 72 of Taylorsville, passed away peacefully February 18, 2021. She was born to the late Roscoe David and Mary Jane Catherine Brookshire Teague in Iredell County. Mrs. Brown was of the Christian faith and was a member... View Obituary & Service Information

The family of Mary Alice Brown created this Life Tributes page to make it easy to share your memories.

Send flowers to the Brown family.