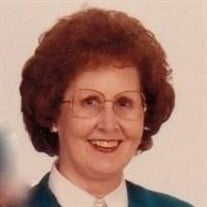 Mary Lou Harris McBride, age 92, life-long resident of Taylorsville, passed away on Friday, September 27, 2019 in Carolina Caring Hospice in Newton. Born September 10, 1927 in Guilford County, moving to Taylorsville, before starting to school, Mary Lou graduated from Taylorsville High School. The wife of Wayne McBride, marrying in December 1949, having known each other since first grade. Mrs. McBride was a member of Mt. Herman Baptist Church and was an active member of the choir for many years. After spending several years rearing her daughters, Mary Lou assumed the position of Secretary for Ellendale Elementary School, retiring in 1990. She and Wayne travelled extensively over the years both before and after retirement, with trips to Germany, France, Switzerland, Canada, Australia and all 50 of the United States. She is survived by her husband of sixty-nine years, Wayne, daughters, Janet Drewry and husband Barzie, with Patricia Tyburski and husband David. Grandson, Lee Drewry, and great grandson, Gavin Drewry. She has numerous nieces and nephews. Mary Lou is pre-deceased by her parents Joseph and Clara Harris and brothers, Joe, Ralph, and Marvin. Visitation will be held on Tuesday evening, October 1, 2019 from 6-8 p.m. at Alexander Funeral Service, with funeral services on Wednesday, October 2, 2019, at 10:00 a.m. at Mt. Herman Baptist Church with the Rev. Paul Schronce and Rev. Dwight Austin officiating. Burial will follow in the church cemetery. In lieu of flowers memorials may be given Carolina Caring Hospice, 3975 Robinson Rd., Newton, NC 28658 or Mt. Herman Baptist Church, PO Bx 697, Taylorsville, NC 28681. Funeral arrangements have been entrusted to Alexander Funeral and Cremation Service. Condolences may be sent to www.alexfuneralservice.com

The family of Mary Lou Harris McBride created this Life Tributes page to make it easy to share your memories.

Send flowers to the McBride family.