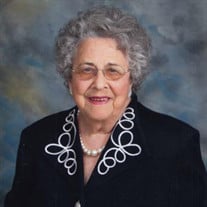 On Easter Sunday, April 4, 2021, Pearl Ingram Childers age 101 went to be with her Lord. She was born Saturday April 12, 1919 the daughter of the late Charlie Mike (Son) Ingram and Olive Florinda Echerd Ingram, she had 14 siblings, she married Fred “Atwell” Childers in 1936 and they shared a life for 66 years. Together they raised a son, Doy and a daughter, Florinda. Educated in the Alexander County Schools and went on to retire from Broyhill Furniture Industries after nineteen years in 1983 as a cloth cutter and button maker. The many years of Ms. Pearl’s life were filled with family, friends and in the fellowship of others. A common sentiment from her loved one was that “she was always the same” and she was widely known for her gracious and kind manner. She was faithful to her family and to her Lord. She was a faithful member of Three Forks Baptist Church since 1932 and was also a choir member. Ms. Pearl was saved at an early age in an encounter with the Lord as she walked home after a summer revival at Three Forks Baptist Church. She was a member since 1932 and remained there for the rest of her life and for much of this time was the oldest living and the longest attending member. Ms. Pearl loved to work in her flowers, sew, and cook. She always said that she had been given a special calling to pray for those who did not yet know Christ and she loved to share her testimony with others. Ever conscious of God’s goodness, she often claimed that she had been blessed by the Lord “with both hands.” Ms. Pearl is survived by her son, Doy Childers of Taylorsville, NC, daughter, Florinda Johnson of Lewisville, NC, granddaughter Sherri Ireland (husband Toby) of Taylorsville, NC, grandsons Chris Childers (wife Chrissy) of Florence Texas, Eugene Childers(Glenda Miller) of Taylorsville, NC, step-grandson Ted Johnson (wife Kelly) of Cary, NC, Jonathan (wife Lee) of Atlanta Georgia, three great-grandsons and two great-granddaughters, four step-great-grandsons and two step-great-granddaughters. numerous nieces, nephews and other extended family members. The body will lie in state at Alexander Funeral Service in Taylorsville on Monday, April 5th from 6:00 pm until 9:00 pm and Tuesday from 9:00 am until 2:00 pm. The funeral service will be held at Three Forks Baptist Church on Tuesday, April 6th at 4:00 pm and the body will lie in state beginning at 3: 00 pm for 45 minutes prior to the funeral service. Officiating will be Dr. Carson Moseley, Pastor Mike Runion, Pastor Stephen Dagenhart, along with Pastor Neal Walker. Pallbearers include Casey Starnes, Kenny Upright, Jamie Cobb, Jeremy Fortner, Jeremy Hollar, and Cameron Childers. Burial will be immediately following the service in the Three Forks Baptist Church Cemetery. The family request that in lieu of flowers, donations be made to the Three Forks Baptist Church Building Fund @,4685 Three Forks Church Road, Taylorsville, NC, 28681 or to Hospice & Home Care of Alexander County, @ 50 Lucy Echerd Lane, Taylorsville, NC. 28681. Alexander Funeral Service request that Covid 19 guidelines be observed. Arrangements will be provided by Alexander Funeral and Cremation Service.

On Easter Sunday, April 4, 2021, Pearl Ingram Childers age 101 went to be with her Lord. She was born Saturday April 12, 1919 the daughter of the late Charlie Mike (Son) Ingram and Olive Florinda Echerd Ingram, she had 14 siblings, she married... View Obituary & Service Information

The family of Pearl Ingram Childers created this Life Tributes page to make it easy to share your memories.

Send flowers to the Childers family.