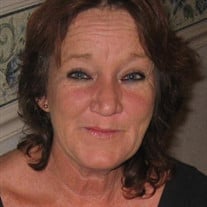 Regina “Diane” Fields Byers, age 61, of Stony Point passed away on Saturday, April 4, 2020 at her residence after a brief illness. Born in Mt. Vernon, Ohio on March 30, 1959, the daughter of Mary Lou Lockhart Fields and the late Charlie Lee Fields. Diane graduated from Lynn View High in Kingsport, TN and studied in the nursing field for a short time. She worked for Dr. Michaels while she lived in TN until her family moved to NC and she started working at Schneider Mills. Her family moved back to TN and she stayed in NC to raise her family. Diane later was employed as a sewer at Broyhill Furniture for many years and had also worked at Craftmaster before becoming disabled. She always had a smile on her face and would be willing to help anyone out. Diane also enjoyed going for walks, working in the garden, or her flower beds. She loved her family, especially her grandchildren. They were her world and she would always say, “she loved them more than frog legs.” Along with her father, she is preceded in death by her brother Chris Fields and sister Lisa Glenn. Cherishing her memory includes her mother Mary Fields of Kingsport, TN; son Darius Byers of Statesville; daughter Michelle Taylor & husband Richard of Taylorsville; grandchildren Grady Byers, Ali & Isiah Fleming, Enoch & Will Taylor, and one on the way, Lily-Ann Taylor, due in May; brother David Fields of Kingsport, TN; sister Elizabeth Jones & husband Greg of Kingsport, TN; the father of her children Mark Byers; along with a number of nieces, nephews, and other friends and family that she loved dearly. And special friend of 14 years Ricky Barnes. There are no formal funeral services planned. A graveside service will take place at a later date with inurnment at Hiddenite Cemetery. Her guest book and memorial folders will be available for a few days in the lobby of the funeral home, if anyone would like to come by and show their condolences to the family during normal business hours.

The family of Regina Diane Byers created this Life Tributes page to make it easy to share your memories.

Send flowers to the Byers family.