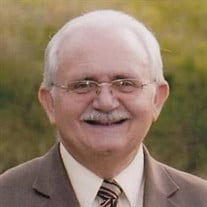 Rev. Gary W. Jennings, age 73, went home to be with the lord Sunday, January 10, 2021 after a hard battle with Covid-19. He was born to the late Carl and Martha Jennings in Sullivan Co. Tennessee on April 27, 1947. Rev. Jennings accepted Jesus Christ as his Lord and Savior when he was 9 years old, started preaching at fourteen, and had his first pastorate at age 20. He was the pastor at Sunnyside Baptist Church, Kingsport, Tennessee for five years and then moved to Taylorsville to become the pastor of East Taylorsville Baptist Church where he lovingly pastored for 30 years. He became an interim pastor after he retired from East Taylorsville, serving at twelve different churches. He was interim at Rocky Hill Baptist Church until his illness. Gary was a 1965 graduate of Lynn View High School in Kingsport, TN and received a Bachelor of Social Work at East Tennessee State University. He served on the Taylorsville Fire Department for 29 years and eventually retired as the Assistant Chief. Rev. Jennings was also on the board of directors at Taylorsville Savings Bank and was president of Alexander Funeral Service for the past 26 years. Gary was named Alexander County Citizen of the Year in 1992 and was named Chaplain of Alexander County in 2002. Those preceding him in death, along with his parents were his sister Patricia J. Newman (Woody), Paternal grandparents Everett and Maxine Pearson Jennings, Maternal grandparents Echol and Cassie Powers Jennings. Those left to cherish his memory are his wife of 54 years, Linda Sturgill Jennings, two daughters Melissa Bowman (Scott) and Heather Miller (Jamie), five grandchildren Katie, Jake (Kendra), and Mollie Bowman, Rhett and Rusty Miller. He had one great grandson, Brooks Bowman, who loved his pawpaw. “The preacher” will lie in state at East Taylorsville Baptist Church on Tuesday, January 12, 2021 and Wednesday, January 13, 2021 from 9 AM- 6 PM. Funeral services for Rev. Jennings will be held Thursday January 14, 2021 at 4:00 pm at East Taylorsville Baptist Church and he will lie-in-state an hour before the service. Family will be in the sanctuary, with a socially distanced service. You can also watch the service via "Live Stream" in the Jennings Family Life Building or you can listen in the parking lot on Radio station 92.5 FM. Rev. Phil Hoskins, Rev. Mitch King, Rev. Jamie Steele, and Rev. Mark Marshall will be officiating. The family requests that everyone strictly adhere to Covid-19 safety protocols. A private graveside service will be held in the Taylorsville City Cemetery at a later date. In lieu of flowers, please make memorials to the charity of your choice and hang a bird feeder in your yard or at a nursing home.

Rev. Gary W. Jennings, age 73, went home to be with the lord Sunday, January 10, 2021 after a hard battle with Covid-19. He was born to the late Carl and Martha Jennings in Sullivan Co. Tennessee on April 27, 1947. Rev. Jennings accepted Jesus... View Obituary & Service Information

The family of Rev. Gary W. Jennings created this Life Tributes page to make it easy to share your memories.

Send flowers to the Jennings family.