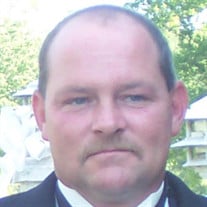 Ricky Allen Powers, age 52, of Statesville, passed away Sunday, April 3, 2022. He was born July 16, 1969, to the late Thurman and Georgie Powers in Russell county, Virginia. Ricky worked in the furniture business as an Upholster. During his... View Obituary & Service Information

The family of Ricky Allen Powers created this Life Tributes page to make it easy to share your memories.

Send flowers to the Powers family.