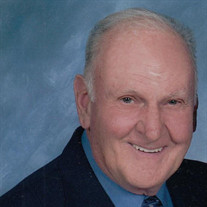 Robert “Bob” Carlyle Fortner, age 86 of Taylorsville, passed away on January 11, 2022, after a long period of declining health with parkinson’s disease. Bob was born on Sunday, April 14, 1935, to the late Howard Boyden Fortner and Lorna Kerley Fortner. He was a veteran of the United States Army. He was a retired truck driver from Sherill’s Furniture. He was a member of Lebanon Baptist Church. After retirement, he enjoyed antique cars and spending time with his grandchildren and great-grandchildren. Including his parents, he is preceded in death by brothers, Harold (Peggy) and Lynn Fortner (Faye) and one sister, Marie Watson, one brother-in-law, Joe James. Bob is survived by his wife of 63 years, Ethel Feimster Fortner, daughter, Debbie Fortner Wike (Danny), grandchildren, Jared Wike (Danielle) and Courtney Lackey (Wesley), great-grandchildren, Ava Taffi, Adeline Wike, Atlee Wike, Crew Lackey, and Elle Lackey. One sister, Doris James and a number of nieces and nephews and friends. Bob will lie in state on Thursday, January 13, 2022, from 9:00 am to 5:00 pm at Alexander Funeral Service. Graveside service will be conducted on Friday, January 14, 2022, at 2:00 pm at Lebanon Baptist Church. Rev. Eddie Jolly will be officiating. Burial will follow in Lebanon Baptist Church Cemetery. Military rites will be provided by DAV Ch. 84 and Ch. 6. Pallbearers will be, Jared Wike, Wesley Lackey, Scott Feimster, Tom Fortner, Randy James, and Danny Wike. In lieu of flowers memorials may be made to Lebanon Baptist Church Building Fund in C/O Tammy Fortner, 70 Mt. Olive Church Road, Taylorsville, NC 28681. Funeral arrangements have been entrusted to Alexander Funeral and Cremation Service. Condolences may be sent to www.alexfuneralservice.com

The family of Robert Caryle Fortner created this Life Tributes page to make it easy to share your memories.

Send flowers to the Fortner family.