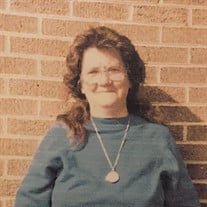 Ruth Marie Ham, age 90 of Taylorsville, passed away peacefully at her home on Saturday morning, March 20, 2021. Ruth was born on January 19, 1931 to the late Columbum Alexander and Emma Harrington Daniels in Alexander County. Ruth was employed... View Obituary & Service Information

The family of Ruth Marie Ham created this Life Tributes page to make it easy to share your memories.

Send flowers to the Ham family.