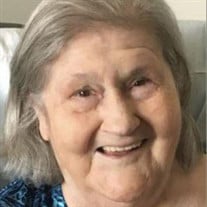 Shirley Elizabeth Mayberry Pennell, age 84 of Taylorsville passed away at Catawba Memorial Hospital on July18,2020. Born to the late Lloyd Richard and Mabel Catherine Duncan Mayberry. Shirley was a member at Calvary Baptist Church in Taylorsville. During her working career she worked at Lewittes Furniture. Shirley enjoyed reading her Bible, watching Hallmark and old westerns movies, she especially loved her family and grandchildren. Shirley will always be remembered as a storyteller and for always have a smile on her face. In addition to her parents, Shirley was preceded in death by her husband, Joe Carl Pennell, grandson, Brandon Brown, niece, Barbara Smith and a sister, Barbara Jean Mayberry. Those left to cherish the memories of Shirley include her partner of forty-two years, James Oxentine, two daughters, Alesia Pennell of Wilkes County, Linda Pruitt of Taylorsville, six grandchildren: Bradley, Joshua, Tamera, Ryan Pennell, Travis and AJ Brown, one sister, Mary Ann McAlpin, two half-sisters, Lottie Mayberry, Shelia Dutton, half-brother, Howard Mayberry, two step- brothers, Fred Blomeier and Lloyd Payung all of Taylorsville, a total of eleven great-grandchildren, and a number of nieces and nephews. Mrs. Pennell’s body will Lie-in-State at Alexander Funeral Service on Wednesday, July 22, 2020 from 1:00 pm until 5:00 pm and also on Thursday and Friday from 9:00 am until 5:00 pm. A graveside service for Mrs. Pennell will be held on Saturday, July 25 at 11:00 am in the Harrington Family Cemetery in Taylorsville. Rev. Taylor Miller will be officiating. The family has requested that in lieu of flowers, donations be made to the Harrington Cemetery Fund, care of Larry Harrington, 5790 N. N.C. Hwy. 16, Claremont N.C. Funeral arrangements have been entrusted to Alexander Funeral and Cremation Service. Condolences may be sent to www.alexfuneralservice.com

The family of Shirley Elizabeth Pennell created this Life Tributes page to make it easy to share your memories.

Send flowers to the Pennell family.