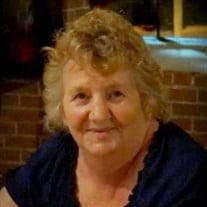 Shirley Ann Oswalt Whaley, age 81, of Taylorsville left this world for her heavenly home on Friday, December 31, 2021, after fighting a long and hard battle with cancer, without complaining. She was born on April 28, 1940, in Mississippi, the daughter of the late Clarence and Annie Ethel (King) Oswalt. Shirley met the love of her life, her husband, the late David Wayne Whaley, Sr. whom she had met more than 60 years ago when they both went North for work straight out of high school. She was a waitress while raising her children, then stayed home and kept her grandchildren while her children worked. Her family was everything to her and she always looked forward to visits from her children, grandchildren, and great-grandchildren. Shirley also loved the weekend trips to Cherokee with her husband and later, trips with her daughters and granddaughters. Along with her husband, father, and mother, Shirley is preceded in death by her brothers Gene & Cecil; and sisters Anne, Agnes, & Janie. Those left to cherish her memory include her children David Wayne (Debbie) of Hickory, Cindy Brackett (Jason) and Brenda Dagenhart (Aubrey) both of Taylorsville; grandchildren Amanda Wike (Jody), Alicia Nicholas (Cole), Courtney Gobel, Brittany Kerley, Lewis Whaley, and Savannah Mitchell (Jake); great-grandchildren Rileigh Nicholas, Hayven Bennett, and Maverick Gobel; brothers Buford, Lewis, & L.D.; sisters Pat (who was her special caregiver), Kathleen, and Bobbie; along with a number of nieces and nephews. The family would like to send a special “Thank You” to the staff at Alexander Hospice for all your love, support, and care during this time. The family will have a private led memorial service to celebrate Shirley’s life at a later time. Inurnment will be with the family. In lieu of flowers, memorials may be sent to Hospice of Alexander at 50 Lucy Echerd Lane; Taylorsville, NC 28681. Funeral arrangements have been entrusted to Alexander Funeral and Cremation Service. Condolences may be sent to www.alexfuneralservice.com

Shirley Ann Oswalt Whaley, age 81, of Taylorsville left this world for her heavenly home on Friday, December 31, 2021, after fighting a long and hard battle with cancer, without complaining. She was born on April 28, 1940, in Mississippi, the... View Obituary & Service Information

The family of Shirley Ann Whaley created this Life Tributes page to make it easy to share your memories.

Send flowers to the Whaley family.