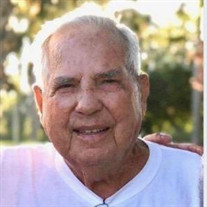 Stanley Curtiss Little, 86, of Flagler Beach, Florida, passed away June 11, 2020 after a period of declining health. Born December 22, 1933 in Alexander County, North Carolina, he was the son of the late David Ransom Little and Ida Pearl Borders Little. Stan was a member of First Baptist Church of Taylorsville and a member of the Masonic Lodge - Parker Lodge No. 142 F&AM, Parker, FL for 62 years. After retiring from the United States Air Force with 21 years of service, he was employed as plant manager of Dixie Boat Works of Newton, NC and later as a pilot for Broyhill Furniture in Lenoir, NC. His many hobbies included researching family history and serving as Vice-President of The Family of Capt. Daniel Little, Esq. national organization for 9 years. During this time, he was responsible for establishing the Capt. Daniel Little Library in the Dr. Q. M. Little House Museum in Catawba, NC. He also enjoyed golf and wood turning and was an avid sailor on his boats (all 3 named "Little Bit") the final 23 years of his life. In addition to his parents, he was preceded in death by a sister, Mabel Lackey, and three brothers, Clayton, Kermit and Gwynn. Those left to cherish his memory include his wife of 67 years, Sarah Juel Johnson Little, his daughter Jill (Rodger) King of Taylorsville, NC, grandchildren Laura (Andrew) Gardner of Monroe, NC and Joel C. King of Concord, NC, two great-grandchildren Curtis and Ruby Gardner, a sister Marie Matthews of Garner, NC, two sisters-in-law Willie R. Little and Joyce Little, a host of nieces, nephews, cousins, other relatives and friends, the N. 12th Street Gang, and our Florida family Martha and Wayne Caldwell. The family requests, in lieu of flowers, that memorials be made to Cystic Fibrosis Foundation, 4550 Montgomery Ave., Suite 1100 N, Bethesda, MD 20814, the Parker Lodge No. 142 F&AM, 4802 East Bus. Hwy 98, Parker, FL 32404, or the charity of your choice. Graveside service for Mr. Little will be held at Three Forks Baptist Church Cemetery on Thursday, June 18, 2020 at 11:00 am. Rev. Dan Redding and Rev. Gary Jennings will be officiating. It has been recommended that mask be worn to the graveside service for Mr. Little. Funeral arrangements have been entrusted to Alexander Funeral and Cremation Service. Condolences may be sent to www.alexfuneralservice.com

The family of Stanley Curtiss Little created this Life Tributes page to make it easy to share your memories.

Send flowers to the Little family.