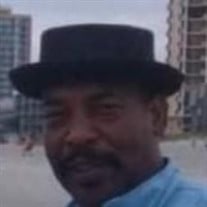 Steven Clay Little 62 of Martin Luther King Drive Taylorsville passed away unexpectedly September 2, 2021. He was born on January 19, 1959, to the late Ada Millsaps Little and R.D. Bud Little. Steve attended Alexander Central High School and continued his education at Ocanalufee Job Corps Center in Cherokee, NC where he studied “electric wiring”. He enjoyed playing basketball. Later in life Steve retired from the International Paper Plant Company in Statesville after a serious injury. He grew up attending Mount Carmel Baptist Church with his family where he learned the difference between right and wrong and to serve God. Steve loved to walk, and after two spine surgeries, he continued to stroll around town with his cane. Steve also loved spending time with his beloved pit bulldog “Lady Bird” and caring for her and her new puppies. Mostly he enjoyed hanging out with close friends, cooking, family dinners, and cookouts. Steve didn’t talk much, and his friends said he was always happy. His response to everything was to smile and chuckle, but he would give his direct and very honest opinion when necessary. In addition to his parents Steve was preceded in death by two brothers, Gary D. Little and Thomas A. Little. He leaves behind to cherish his memories, his wife of eight years Adaira Ann Smith and four children. One daughter Ambre Flowers of Taylorsville, three sons: Stephence Clayborne Flowers of Oak Ridge, TN, Hassan Flowers of Knoxville, TN, and Christian Little (Keara) of Troutman, NC. Two sisters, Geraldine L. McCombs, and Vickie (Cathy) Carlton both of Taylorsville, one brother, Ronnie Little of SC and a host of nieces, nephews, and grandchildren. Mr. Little will lie in state at Alexander Funeral Service Sunday September 12, 2021 from 12:00 pm to 4:00 pm followed by a service in the funeral home chapel at 4:00 pm. Rev. William Little and Rev. Sterling Howard will officiate. Funeral arrangements have been entrusted to Alexander Funeral and Cremation Service. Condolences may be sent to www.alexfuneralservice.com

The family of Steven Clay Little created this Life Tributes page to make it easy to share your memories.

Send flowers to the Little family.