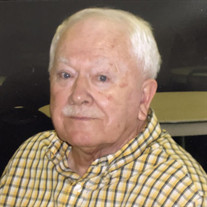 Terl Hayden Austin, age 84, left this world for his home in heaven on Monday, March 22, 2021. He was born on June 15, 1936, in Taylorsville to Chalie and Rachel Austin. He was residing in Trinity Village at the time of his death. Terl was a faithful member of Antioch Baptist Church prior to his declining health. He enjoyed worshiping, serving, and visiting with fellow church members. Mr. Austin worked as an upholsterer most of his adult life. After retirement, he also worked as a greeter at Walmart in the Garden Center. He was outgoing and liked to meet people. He loved talking with people. Mr. Austin was known for saying “Don’t I know you?” in the midst of the conversation. He enjoyed gardening—especially his tomatoes and green beans. He valued education and was proud his children had all graduated from college. Mr. Austin was preceded in death by his parents and siblings, Levern (Jo Alyce) Austin, Johnsie (Dwight) Dyson and Lorene (Claude) Richey. Terl and Jeanette Wike Austin were married for 64 years. He loved his family and loved for them all to be together. Besides Jeanette, he leaves a son, Nathaniel Terl Austin (Gay) of Newton, NC; three daughters, Jennifer McMurtrie (David) of Greensboro, NC; Elizabeth Davis (Brent) and Virginia Austin of Taylorsville to cherish his memory. Grandchildren include Joy Austin of Wilmington, NC; Holly Austin of San Diego, CA; Kristen McMurtrie Gonzalez (Abe) of Matthews, NC; Erin McMurtrie Bray (Kory) of Chicago, IL; Jonathan Austin McMurtrie (Emily) of Harrisonburg, VA; and Luke Austin Davis of Taylorsville. Great-grandchildren include Benjamin and Abigail Gonzalez and Elliott Claire McMurtrie. Mr. Austin will Lie-in-State at Alexander Funeral Service on Friday March 26, and Saturday, March 27, 2021 from 9:00 am – 5:00 pm. Services will be held 2:00 pm Sunday, March 28, 2021 at Antioch Baptist Church in Taylorsville, NC with Rev. Mark Morris and Rev Mike Johnson officiating. In lieu of flowers, memorials may be made to Antioch Baptist Church, 580 Antioch Church Road, Taylorsville, NC, 28681. Funeral arrangements have been entrusted to Alexander Funeral and Cremation Service. Condolences may be sent to www.alexfuneralservice.com

Terl Hayden Austin, age 84, left this world for his home in heaven on Monday, March 22, 2021. He was born on June 15, 1936, in Taylorsville to Chalie and Rachel Austin. He was residing in Trinity Village at the time of his death. Terl was a... View Obituary & Service Information

The family of Terl Hayden Austin created this Life Tributes page to make it easy to share your memories.

Terl Hayden Austin, age 84, left this world for his home in heaven...

Send flowers to the Austin family.