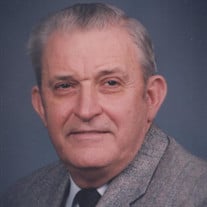 Thomas Paul Clanton, age 89, of Statesville, passed away on Friday, August 28, 2020, following a period of declining health. Visitation will be conducted on Monday, August 31, 2020, from 2-3 p.m. at Rocky Hill Baptist Church, with funeral Services at 3 p.m. Burial will follow in the church cemetery. Mr. Clanton was born, August 7, 1931, to the late Mary Elizabeth Clanton in Iredell County. Paul was a producer for Perdue Farms for many years. He had retired from Schneider Mills in Taylorsville. A member of Rocky Hill Baptist Church, he was very active in the Central Fire Department as a founding member and having served as Assistant Chief and a member of the Board of Directors. He was a fan of Wood Bros. Racing Team and loved to travel. Paul was well known and a great conversationalist. In addition to his mother, he was preceded in death by his wife Sarah McHargue, a daughter, Deborah Morrison, one sister, Hazel Hartness and a brother, Dwight White. Paul is survived by one daughter, Angela Dobson, two sons, Tony Clanton and special friend, Robin Connolly, Scott Clanton and wife Tammy, all of Statesville. Nine grandchildren and ten great grandchildren remember him. He has a number of nieces and nephews and a special niece, Janet Snow. Members of the Central Fire Department will serve as pallbearers and honorary pall bearers. Rev. Gary W. Jennings, Rev. Curtis White and Rev. Mike Duncan, will officiate. In lieu of flowers donations may be made to the Central Fire Department in Statesville at, 4634 Wilkesboro Hwy Statesville, NC 28625. Arrangements have been entrusted to Alexander Funeral and Cremation Services in Taylorsville.

The family of Thomas "Paul" Clanton created this Life Tributes page to make it easy to share your memories.

Thomas Paul Clanton, age 89, of Statesville, passed away on Friday,...

Send flowers to the Clanton family.