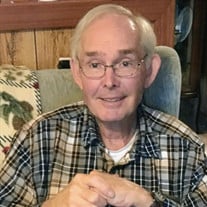 Wayne Eugene Wooten, age 78, of Hiddenite passed away on Sunday, December 1, 2019 at his residence. Born to the late James Long and Bernice McNeely Wooten, on March 17, 1941, in Iredell County, Wayne was an active member of the community and an ultimate “Renaissance Man”. Wayne was knowledgeable and interested in art, music, literature, nature, animals, flowers, sports, cars and technology. He was both a life-long learner and educator. He earned a Bachelor of Arts from Saint Andrews Presbyterian College and later earned a Master of Arts in English from Appalachian State University. He also attended Crozer Theological Seminary in Pennsylvania where he studied Divinity and developed his keen understanding of religion. Wayne taught high school English and history at South Iredell High School and then transitioned to Catawba Valley Community College. At CVCC, Wayne taught Humanities and eventually became a highly respected and valued leader at the institution. Wayne was also an invaluable member of the Alexander County community. He was active in the Gwaltney Ruritan Club. The Hiddenite Arts Council was precious to him. The Council gave him an opportunity to share his love for the arts in the area. Wayne was a dedicated Mason in the Stony Point Lodge, holding several major positions during his tenure. He was also a member of the local garden club, Alexander County Agriculture Extension, and Catawba County Beekeepers. Wayne gained great joy from his family, especially his grandchildren. He was a role model for them and all who knew him. Mr. Wooten is survived by his wife Joyce Williams Wooten of the home; one son, Eric Bryan Wooten of Baltimore, MD; a daughter, Aden Wooten Cranford and husband, Dennis Cranford of Hickory; one stepdaughter, Jamie Allison Christenbury of Hiddenite. Wayne will be remembered by his two grandchildren, Maelyn and Max Cranford, of Hickory. One sister survives, Janet Cynthia Wooten of Lakeland, FL. Visitation for Mr. Wooten will be held Thursday, December 5, at Alexander Funeral Service from 5-7 p.m. A memorial service for family and close friends will be held on the family farm at a future date. A scholarship fund has been established at CVCC in Wayne’s honor. Memorials may be sent to the Wooten Scholarship Fund in care of the CVCC Foundation at 2550 Hwy 70 SE Hickory, NC 28602. Funeral arrangements have been entrusted to Alexander Funeral and Cremation Service. Condolences may be sent to www.alexfuneralservice.com.

Wayne Eugene Wooten, age 78, of Hiddenite passed away on Sunday, December 1, 2019 at his residence. Born to the late James Long and Bernice McNeely Wooten, on March 17, 1941, in Iredell County, Wayne was an active member of the community and... View Obituary & Service Information

The family of Wayne Eugene Wooten created this Life Tributes page to make it easy to share your memories.

Wayne Eugene Wooten, age 78, of Hiddenite passed away on Sunday,...

Send flowers to the Wooten family.