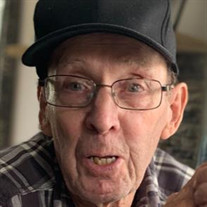 Willard Wilson Hatton, age 78, of Taylorsville, passed away in Carolina Caring, on Friday, April 23, 2020, following a period of declining health. Born November 1, 1941 to the late Thomas Wilson and Beatrice Eda Pennell Hatton in Alexander county, he was of the Baptist Faith. Employed by Tom Fortner Logging and Raymond Childers Lumber, he had worked in the lumber industry as a career. He was a devoted gardener, and an even more devoted fan of his grandchildren’s ball teams. In addition to his parents, he was preceded by an infant sister, Edna, as well as three brothers, Tommy, Larry Jimmy Hatton, nephew, James Hatton and, niece Tammy Dawn Hatton. He is survived by his wife of 53 years, Betty Carol Walker Hatton of the home. Willard has three children, daughters, April Johnson {Eddie} or Hiddenite and Kim Bishop {Mark}, of Taylorsville and a son, David Hatton and special friend, Laura Tedder, of Taylorsville. Five grandchildren fondly remember him, Derrick Hatton {Keri} of Taylorsville, Kassie Hatton Clawson {Dillon}, of Silva, NC, Avery and Rachel Bishop, both of Taylorsville, and Zoe Johnson, of Hiddenite. He also has two great grandchildren, Bailey and Briar Hatton, both of Taylorville. Mr. Hatton has two brothers surviving, Herman {Geraldine} and Don {Louise} Hatton all of Taylorsville. Two sisters-in-law remember him, Linda Hatton and Pearl Hatton, both of Taylorsville, along with a number of nieces and nephews. Private memorial services will be held at a later date. Donations may be made to the Hospice of one’s choice. Funeral arrangements have been entrusted to Alexander Funeral and Cremation Service. Condolences may be sent to www.alexfuneralservice.com

The family of Willard Wilson Hatton created this Life Tributes page to make it easy to share your memories.

Willard Wilson Hatton, age 78, of Taylorsville, passed away in...

Send flowers to the Hatton family.