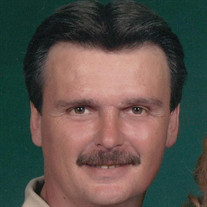 Woodrow “WOODY” Henry Honosky, 56 of Taylorsville, NC passed on to his heavenly home at Wake Forest Baptist Health Cancer Center on March 20th, 2022, surrounded by his loving wife, family, and friends. He was born on October 23rd, 1965, to the late Michael Henry Honosky and his precious mother, Thelma Marie Estep Honosky Blair. In addition to his parents, he was proceeded in death by his beloved in-laws, Julius “Johnny” Blankenship, and Dimple DeHart Blankenship. Woody was a longtime member of Rocky Face Baptist Church of Hiddenite, NC where he came to know the Lord and a current member of Unity Baptist Church of Taylorsville, NC. Woody loved the Lord and was accepting of the Lord’s will for his life in his final journey through his long illness. Woody loved tinkering with anything that needed to be fixed as he was gifted with many mechanical abilities. In Woody’s lifetime he was blessed to work as a Welder and CNC machinist for several companies where he met several lifelong friends. Woody thoroughly enjoyed his last employment as a Miller Certified Welding Technician for James Oxygen in Hickory, NC. Woody loved spending time with his family and was the anchor in his family’s life. Their devotion and love for him knew no bounds, counting it as a privilege to take care of him and he was so thankful to the Lord for them. He constantly told his doctors and nurses about how the Lord had blessed him so! Those left behind to cherish his memory is the love of his life, his wife of 33 years, Gina Kay Blankenship Honosky of the home, his only son, Woodrow “Ethan” Honosky of the home and his fiancée Heather Elise Rhodes (who was his special daytime caregiver), his beloved sister, Shelly Honosky Henson and her husband, Kevin Henson of Edgewood, KY, sister-in-law, Vivian Blankenship Booth and husband, Robert Booth of Charleston WV, four nephews, numerous aunts, uncles, cousins, and many friends of his son’s that frequented his home over the years that were just like family to him. There will be no formal visitation or service in Alexander County as the family will be hosting a Celebration of Life Memorial Gathering with family and friends at a later date. In lieu of flowers the family requests that donations in honor of Woody’s memory may be given to one of the following: Esophageal Cancer Action Network at ecan.org Unity Baptist Church Building Fund 5408 Rink Dam Rd. Taylorsville, NC 28681 Funeral arrangements have been entrusted to Alexander Funeral and Cremation Service. Condolences may be sent to www.alexfuneralservice.com

The family of Woodrow Henry Honosky created this Life Tributes page to make it easy to share your memories.

Send flowers to the Honosky family.